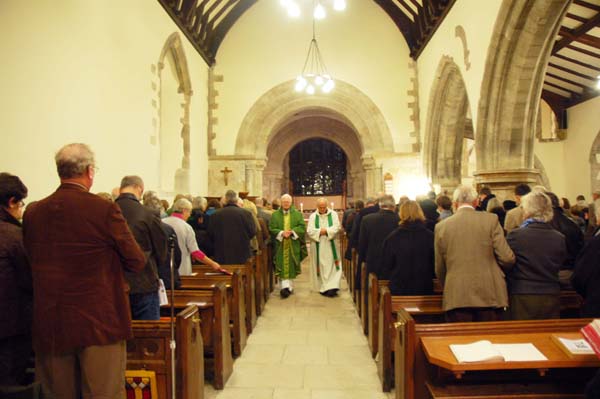 Catholic Canon Gerard Hetherington and Anglican Canon Terry Louden process down the aisle of All Saints after the service. 2013. 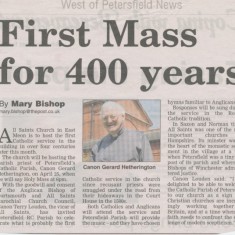 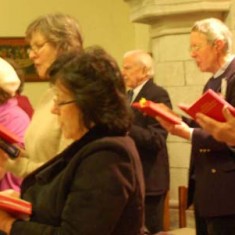 The choir comprised singers from both congregations and sang the Responsorial music as well as hymns chosen because they were familiar to both sides. 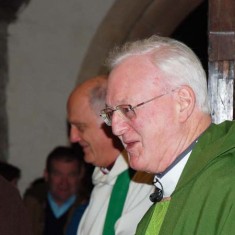 The Parish Priest of Petersfield Parish, Canon Gerard Hetherington said the Mass. All Saints’ Vicar, Canon Terry Louden, accompanied him and welcomed the Catholics in the congregation. 2013 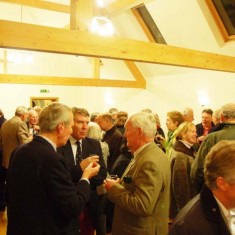 Despite dreadful wind and rain that day, the event was very well attended - an estimated 150 people, both Petersfield parishioners and the congregation of All Saints. Its Vicar, Canon Terry Louden, welcomed his catholic guests in the name of Christian Unity, emphasising the similarities rather than the differences between the two branches of Christianity, a sentiment echoed by Canon Hetherington.

On Saturday November 14th the Catholic Dean of Petersfield Parish, Gerard Hetherington, celebrated Holy Mass at All Saint.;The invitation came from the vicar of All Saints, Rev Terry Louden,  and the Parochial Church Council with the consent of the Anglican Bishop of Portsmouth. This was the first RC Mass to be held there since the 16th Century; the last one was probably in the 1580s when it is believed that recusant priests were hidden in the Court House and smuggled into the church through a tunnel under the road.

(Below, a copy of the Petersfield Parish edition of The Dome is attached as a PDF; it records the event.)

East Meon was an important religious centre long before Petersfield was more than a huddle of huts. Even before the Norman Conquest it is recorded that the great Saxon King Edgar granted ‘that famous place which the locals have always called Aet Meon’ to his grandmother Eadgifu, the widow of King Athelstan, so that she could retire to the religious life. East Meon then consisted of sixty-five earth houses, which are thought to have been a monastic settlement, occupied by people committed to the religious life who worshipped in the Church and conducted their studies and meals in the building which preceded The Court House.

East Meon continued to thrive in Norman times as a ‘peculiar’ owned by the Bishops of Winchester who dispensed justice at assizes held in The Court House. It appears that the village was reluctant to fall in line with Henry VIII’s Reformation; six residents of East Meon are recorded as martyrs who suffered or died for their faith including Don Sigebert Buckley, described as ‘The last monk of Westminster’.

It was originally planned that the RC Mass would be held in April but the collapse of part of the ceiling prevented this happening. All Saints renewed its invitation to Petersfield Parish, which was warmly accepted, and both congregations, Anglican and Catholic, were well represented

The vicar of All Saints, Canon Terry Louden, welcomed the Catholic visitors to this historic event – ’The first Mass to be said in the Roman rite for over 400 years”. Both he and Canon Hetherington affirmed their commitment to future unity between the two branches of the Christian religion.