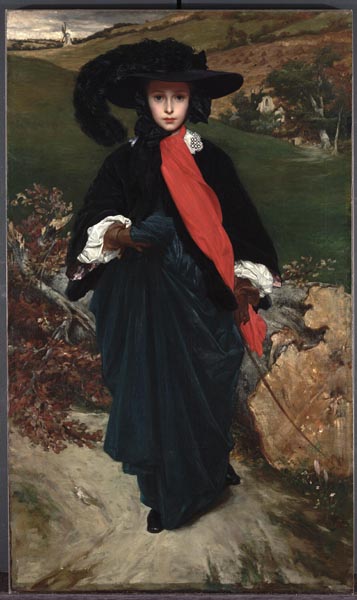 Portrait of May Sartoris, painted at Westbury by Frederick Leighton 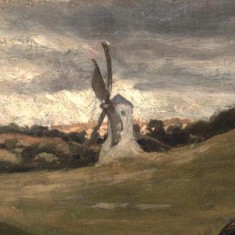 There are two buildings in the painting. The windmill on the hill was almost certainly Marland's Mill which sits on a hill a mile north of the village and which couldn't be seen from Westbury House. 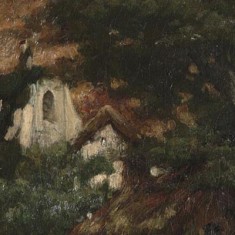 The second building is the tower of a church. It is certainly not the church of East Meon. It is most likely that the church tower is that of West Meon's previous church. 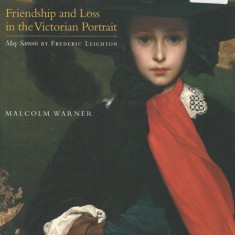 Friendship and Loss in the VIctorian Portrait, in which Malcolm Warner describes the portrait of May Sartoris, one of the prize possessions of the Kimbell Gallery in Fort Worth, Texas

Thomas William, the 4th Viscount Gage rented the property in the late 1850s/early 1860s to Edward  and Adelaide Sartoris  and his family, his connection being through a maternal uncle, Edard Tunno, who lived nearby at Warnford Park, whose sizeable fortune Sartoris stood to inherit.

The Sartorises were a colourful family. May’s mother Adelaide was one of the illustrious theatrical family, the Kembles, and one of the greatest opera singers of her time. Adelaide and her wealthy husband Edward lived at Westbury as tenants from 1859 to 1863, in which year they inherited the nearby Warnford Park and moved there. Adelaide was a great hostess and friend of many of the great artistic, literary and musical figures of their age – including Robert Browning … and Frederick Leighton.

Malcolm Warner, curator of the Kimbell Museum in Fort Worth, Texas,  asked for help in identifying the two buildings featured – the mill at the top right of the painting and the church at May’s right shoulder. He wanted to establish where May would have stood for the painting to be made.

The two buildings in the painting are a mill and a church tower. The present church of West Meon was built after Leighton painted this portrait. In the grounds of Westbury are the ruins of St Nicholas chapel which is reputed to be 13th century in origin. It is much smaller and ruinous today than at the time of the painting. Our colleagues in West Meon have found reference to the chapel being restored in the 1790’s or thereabouts for use by the family of the third Viscount Cage. However, it is a small building and would never have had a square tower. As indicated, the church in the painting was probably the predecessor of West Meon’s present church.

There is no viewpoint from which Marland Mill and West Meon Church could have been seen together (still less St Nicholas Chapel) so it is most likely that Leighton painted May first, then walked around the neighbourhood with his easel, filling in the background from items which caught his fancy.