The Westbury cricket team, 1909. Colonel Le Roy-Lewis is wearing a boater and dark jacket, his wife and son on either side. 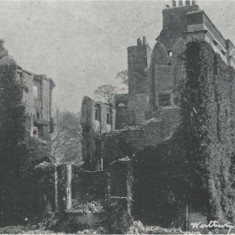 Staff of Westbury House in 1895, before the fire.

The man in the dark jacket and boater is Colonel Le Roy-Lewis, with his wife and son on either side. (The caption says "West Meon" which may be because the cricket pavilion was over the border ...)

The fourth Viscount Gage sold Westbury House to John Delawar Lewis, from whom it was passed to his son Colonel Le Roy-Lewis. This section contains photographs of the staff and cricket club of Westbury House in the early days of the 20th century. In 1904, the Times of London reported Colonel Lewis’ gallantry in saving the lives of some of his domestic staff from a devastating fire which destroyed the Palladian mansion. A transcript of this article can be read below.

From the Times of London

In this disastrous fire which destroyed a Hampshire Mansion, it was through the strenuous efforts of the owner, Colonel Le Roy-Lewis, that his wife, five children and some 30 servants were all saved.

A fire, which resulted in the almost total destruction of Westbury House, West Meon, near Petersfield, the residence of Colonel Le Roy-Lewis D.S.O, occurred early yesterday mroning. Owing to the efforts of Colonel Le Roy-Lewis himself, no lives were lost by fire, but the housekeeper, an elderly woman named Jane Henley, who had been in the service of the family for many years, died on the roof from shock and fright before she could be rescued. The cook, whose name is Hall, jumped from the roof in her fright and broke her wrist. She was removed to Winchester Hospital.

The escape of the occupants was most exciting. The French governess, who occupied a bedroom at the rear of the main part of the house, raised the alarm at about 3am. Her cries were heard by Colonel Le Roy-Lewis, who immediately did what he could to rouse the family. Rushing out of his bedroom he found the staircase burning and the corridors filled with smoke, and all means of escape cut off. His first impulse was to save his five children,and he ran through the flames to the children’s wing and found that that part of the house was safe. Getting out of a window, he scrambled along a narrow ledge to a stack pipe, down which he slid to the ground, a distance of about 40 ft. He rushed to the stables, and with some difficulty roused the stablemen, and with the aid of three of them tried to raise a heavy ladder to the French governess’ window, but it fell and broke.

A messenger was despatched to Petersfield on a bicycle, some eight and a half miles distant, and the Petersfield Fire Brigade arrived about 6 o’clock, but they could do no more than play on the burning building and prevent the fire from spreading to the childrens’ wing, a new part of the house which had only been built some three years.

The mansion itself is an old one, standing in a well-wooded park of 500 acres, and is in the Queen Anne style. It contained many fine pictures and some rich carving by Gibbons. Most of the rooms were wainscotted in oak, and there was a fine library. All these have been destroyed, only a few articles of furniture being saved. The family lost all their personal belongings.

Note that The Times has got it wrong … Westbury House is, and always has been, in the Parish of East Meon.

The building was completely gutted, apart from the recently-built schoold wing, the destroyed contents included fine pictures and a valuable library….

The gallant Colonel lost no time in rebuilding the mansion, regardless of cost. Ground-floor rooms included a ‘saloon or lounge’ (45ft by 27ft), with oak-panelled walls and housing a ‘three-manual organ, electrically blown’, an elegant drawing room (72ft by 21ft), fitted with mahogany glazed bookcases of Chippendale design, a dining room (32ft by 21ft), with painted panel walls; plus a study, boudoir and billiards room. Approached by a massive carved oak staircase, the first room comprised three suites, each having two large bedrooms and bathrooms, and three more large bedrooms. These nine rooms were doubtless for use by the owners and their guests, for there were seven more bedrooms and a bathroom on the second floor for female domestic staff, a nuersery wing with yet another seven bedrooms and a bathroom, and a school wing containing a schoolroom and two more bathrooms. The second floor also included a squash court, while the ‘domestic offices and servants’ accommodation’ consisted of a butler’s pantry, housekeeper’s room, box-room, wine cellar, huge kitchen, scullery, boiler room and coke stove, with five bedrooms and a bathroom above for men servants.

The house had an electric passenger lift, a dinner lift from the kitchen, and electric light throughout, electricity being generated by two 25 hp Hornsby Stockport engines. Heating of the whole building was by radiators, two reservoirs held 80,00 Gallons of water pumped from a deep well, and (predictably) there was ‘an elaborate system of fire-alarms and well planned fire-escapes’. Apart from the mansion, detached buildings included ‘commodious stabling’, with grooms’ rooms above, a coachman’s house, an estate office and steward’s house, an elaborate cricket pavilion and numerous ‘estate buildings’. The gardens and grounds covered 21 acres.