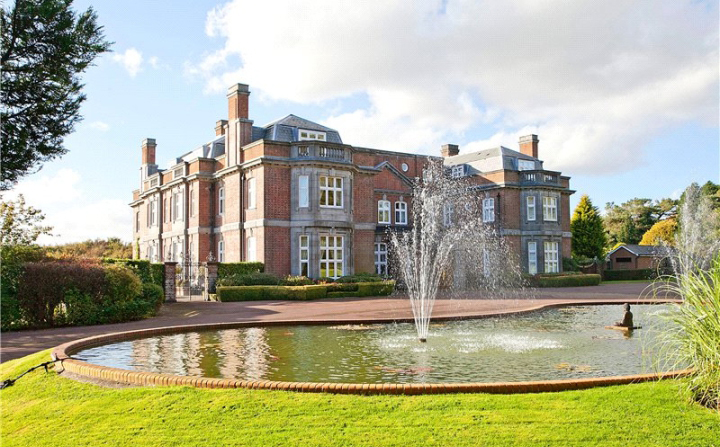 Front of Leydene House, with fountain. 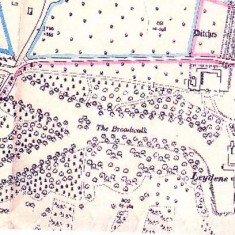 Map of Leydene Estate, pre-war. Work started on the Main House, designed by Mr Jupp FRIBA of London, in the Spring of 1914 and an area north of Leydene Bottom was levelled for the foundations. The stone came from Belgium, shipped across the channel, then by rail to Havant and finally by lorry to the site. The bricks were specially made by Rowland’s Brick Works. The Peel’s moved into the farm house at Coombe Cross to keep an eye on construction. They stayed at the farm house for ten years. However, the First World War brought a halt to construction, as the labourers, who were all local, were needed for war work and to expand the armed forces. 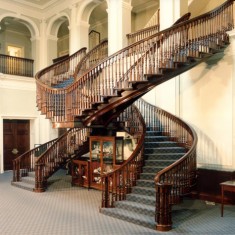 Lady Peel had engaged Hooydonk Brothers to design Leydene; described as ‘Decorative Artists’, they had created elaborate interior schemes for homes of the ‘moneyed classes’. Their most notable contribution was the double-spiral staircase in the spacious entrance hall. 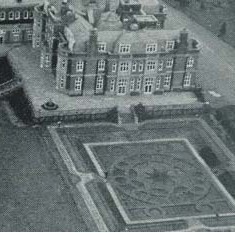 Leydene House, with the garden based on one of Lord Ashton's linoleum patterns. Work re-commenced in 1919 and the Main House was completed in 1925, although some rooms were occupied in 1924. However, the original plans had to be curtailed slightly, as a result of the war devaluing the pound. Some ‘corners’ were cut during the construction, such as a lack of damp course and some external walls only being one brick thick. This caused a lot of problems in later years. 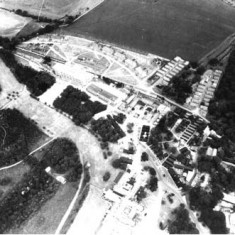 Aerial photograph of the buildings which comprised HMS Mercury. In 1941, Leydene House and 100 acres had been occupied by the Royal Navy, whose Signal School in Portsmouth had suffered from heavy bombing. A Wardroom annex was constructed to the south of the Main House, known as Siberia Block. A large Nissen hut was completed in July 1943 and was used as a cinema, theatre and assembly hall, followed by other training facilities and accommodation. 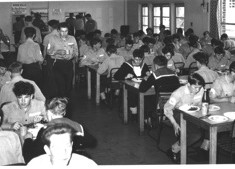 Naval Ratings in the dining Hall of the signals establishment. 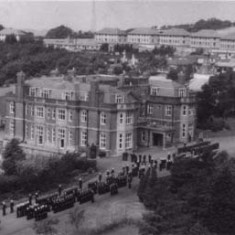 Main house in 1950s, with naval parade taking place in front of it. The first semi-permanent buildings to be constructed commenced in April 1944 and were the classrooms of North Camp.. The Navy requisitioned the property in 1945 and bought Leydene House in 1949. 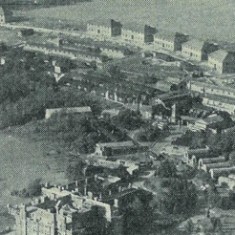 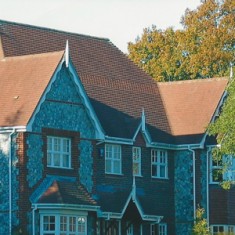 In May 1953, the remainder of the Leydene Estate was sold by auction in 51 lots, many of which were gratefully acquired by sitting tenant farmers. In the 1990s, detached houses with large gardens were built on the estate. 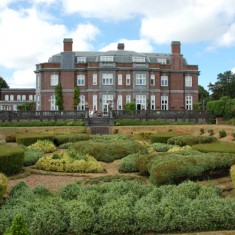 Leydene from south with garden pattern. The main house was converted into luxury apartments, and the mews into houses.

These photographs show Leydene House as it was before the war, then during its period as HMS Mercury, a naval signals station, and today. A history of HMS Mercury is attached as a PDF. Another PDF contains notes on the history, drafted in prepareation for the House History panel.

A paper copy of the History of HMS Mercury is in the Library. Larger resolution files of the photographs available at Drobox/Resources/Places/Leydene House