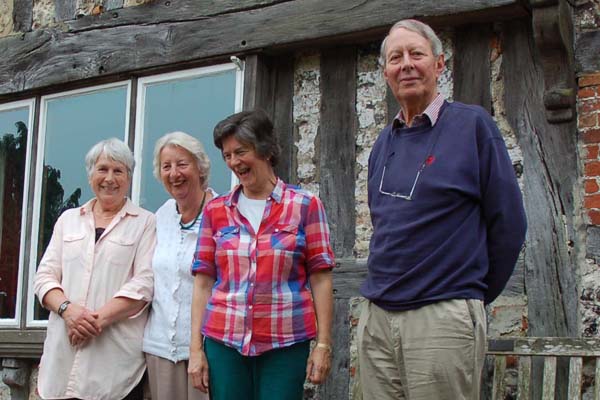 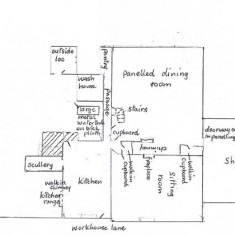 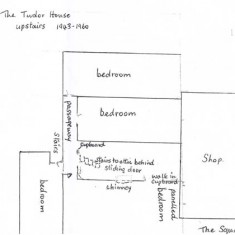 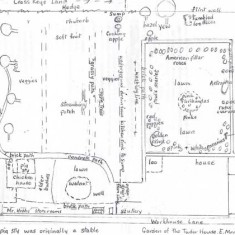 Olivia Tottle's plan of the garden in the 1940s/50s - much of it dedicated to the growing of produce. 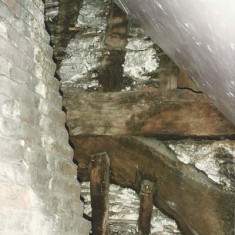 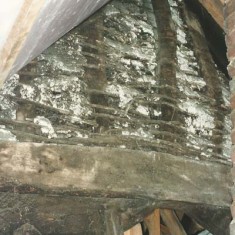 Wattle and daub and gable bared 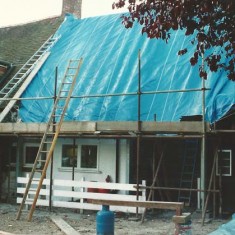 Kitchen roof under tarpaulin during alterations 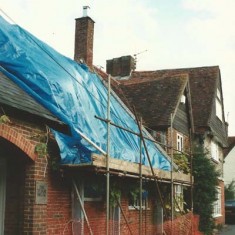 Street side under scaffolding and tarpaulin 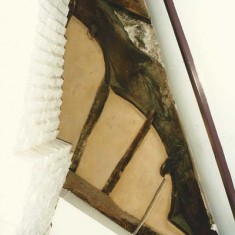 Truss beam and plaster after restoration 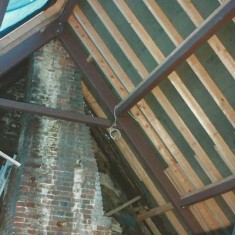 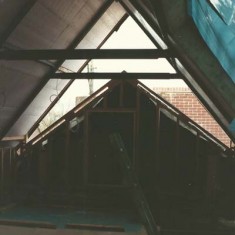 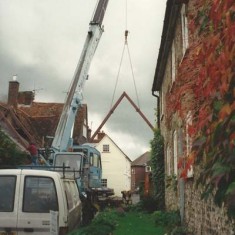 Workhouse Lane was closed for the erection of the steel framework. 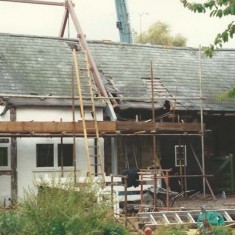 Instaalling extra floor`from the north of The Tudor House, the steel frame being lowered. 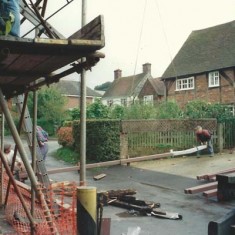 Scaffolding on the street side, and Heycroft House opposite. 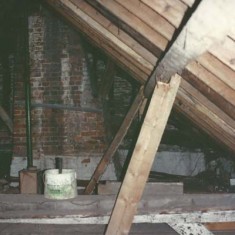 Support beams inside the roof. 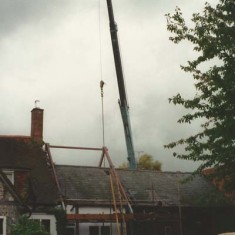 A giant crane was used to lift the framework and lower it into position. 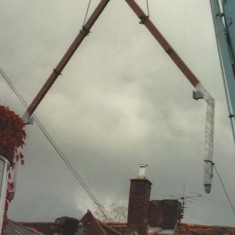 A pillar is lowered into position. 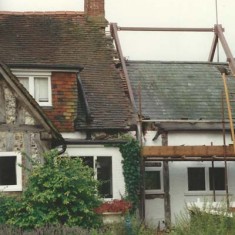 Frame in position from garden. 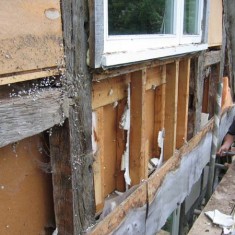 Insulation being installed below the north window of the second floor 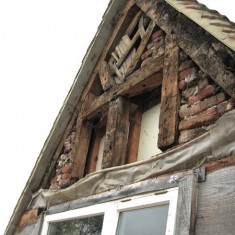 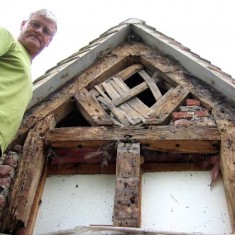 This section contains recollections and records of owners since World War II. Olivia Tottle recalls the layout of the house when her family, the Woodfields, moved there in 1940. Tricia and Michael Blakstad bought the house in 1981 and made several alterations before they sold it to Chris and Jane Cobley in 2011. In particular, they raised the roof above the kitchen, to open up the great Truss Beam and to create a studio; they also stripped the gables on both sides of the house, to restore the woodwork and instal insulation.

Olivia Tottle, nee Woodfield, lived in The Tudor House from 1943 until 1960. For a record of her family, click here.

Tricia and Michael Blakstad bought The Tudor House in 1980, and sold it to Jane and Christopher Cobley in 2011. They raised the roof above the kitchen, to add a studio space and to provide access to the great truss beam, They also removed the boarding on both the two gables, installed insulation, and replaced the clapboard.

Olivia produced her own hand-drawn maps as she remembered the house and garden, above..

This was the Woodfield’s sitting room. There was a door to the road in the wall to the right of the conservatory door. As this was hardly ever used they had a piece of furniture infront of it. Where the bookcase now is there was a fire place which burnt coal making this the warmest room in the house. When O had measles, aged 3, she was brought down to sleep here to keep warm. Where there are now open beams between the study and the dining room was a wall with no opening.

The window was smaller and had a good, wide window sill which you could sit on.

To get from the Sitting room to the kitchen you went out towards the Panelled room and down the step and round into the kitchen. The same door is there now. The cupboard in the space between Sitting and Panelled room was wallpapered and full of old tins which may have had something to do with the shop.

This was the kitchen. The front door to the house was to the left of the window (as can be seen clearly from the outside). The present kitchen door lead to the scullery and the back door to the house went out through the ‘window’ in the downstairs loo. The cloakroom didn’t exist and so the kitchen was a little wider than now.

There was a black range in the chimney and a very small electric stove on which Mrs Woodfield cooked for the family.

The kitchen was extremely cold partly because it had so many outside doors.

This was the scullery and the source of the only cold water supply in the house. The room was half the size of the present room (basically the area where we have the table and chairs). There was a butler’s sink under the further window and the window nearer the door was smaller.

This was the Woodfield’s dining room. It was hardly ever used in the winter as it was too cold! The walk-in cupboard was wallpapered. The room was very dark.

Was there a doorway to the shop through the East wall where a cut can be seen in the panelling?

There was a door shutting the hall off from the kitchen. The diagonal beam protruding from under the landing, on which tall people hit their heads, was part of the support for this doorway.

Walking from the front of the house towards the garden, roughly where the front door is now, there were two steps up, you turned to the right and back on yourself to go up the stairs to the first floor.

If you continued straight on, on the ground floor, you came to the Pantry. This was freezing cold!

There was no window in the hall on your right and no front door but where there is now a hall window was the door to the Wash-house.

The stairs arrived outside the current little bathroom door. The beams on the landing were all filled in and were full of death watch beetle which could be heard munching away at the wood in the spring!

This was Olivia’s sister’s bedroom. It was bigger than now as it extended, under the sloping roof, to the back of the house (where the airing cupboard and part of the little bathroom are).

‘The’ Beam was painted over as were all of the beams throughout the house. One day someone came from Winchester to see the house and thought that the beam might be 14th C. People in the village didn’t think about the age of the house; it was just considered to be very old.

Olivia was convinced that there was no window at the front and that her parent’s bedhead was against the front wall. The side window looked over the shop. The walk-in cupboard is just as it was and that is where the gas masks lived. The ceiling of the cupboard is made of very irregular and bumpy plaster and O commented that most of the ceilings were like that.

The side window had a wide ledge on which O sat to watch troops marching through the village on their way to D-Day.

There was an open fireplace in which there was an electric fire; the only one in the house.

Behind the main bedroom door, on the right, there was a sliding door. This opened onto a very small, wonky, turning staircase which led up to the attic.

From the main bedroom the passage followed the current landing. Just about where the attic stairs are now was the door way into O’s bedroom, quite a nice big room. The window looked over the shop. There was a fireplace in this room which was never used.

The bedroom at the back of the house was the spare or where her brothers stayed when they came home. The window was smaller and there was no window at the side (was this something to do with window tax?). O always felt that this room was very high up! All the beams in this room were plastered over and the plaster painted.

Hardly anyone went up into the attic, it was used as a store. Only went up to see if the roof was leaking! The approach was difficult and there were so many holes in the floor that it was dangerous! Pieces of newspaper and bits of carpet were laid over the worst holes! The attic was full of rats which could be heard running around.

The post in the floor marks the top of the old stairs.

There was no lining to the roof and you could see the tiles. If a tile slipped O’s father tried to re-place it from inside the attic. Snow came in under the tiles.

On VE day a flag was hung from the front window. The windows at either end were smaller than now.

Where the porch is now there was a corrugated iron roof, held up by an upright post, which served as a porch to the back door.

Around where the Japonica bush is was the wash house with the outside loo somewhere to the left of it. The original outside loo having been under the Yew tree at the bottom of the garden.

I was interested to hear that O was living in the house when the new route for the river was cut. I always forget that the river wasn’t at the bottom of the garden until quite recently!

Notes, Olivia's sketch plans and photographs of Woodfields B/5, Photo prints of studio and gable conversions, B/19