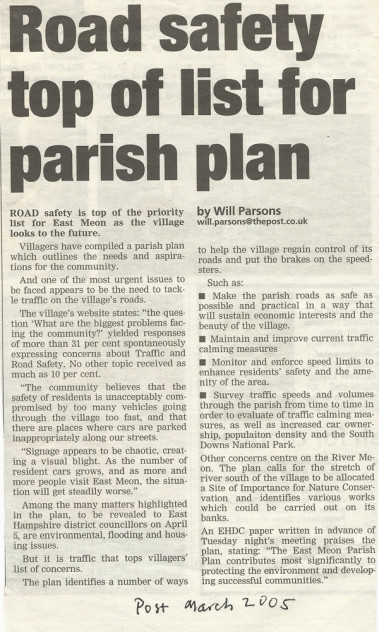 In March 1974, a centre-page spread appeared in the Petersfield Post, written by journalist and East Meon resident Glynn Williams, with photographs by Donald Eades (top image).Among those featured are the then vicar, Rev Rodney Smith, shepherd John Read, Herbie Goddard and his son David.

In January 1996, Blue Heaven Television filmed an episode of Ruth Rendell Mysteries for Meridian Broadcasting, to be screened on ITV.

In March 2005 the Post reported on the Parish Plan prepared by the Parish Council (photograph, above)

On January 1st 2014, the Post’s ’Looking Back’ feature was dedicated to East Meon and contained eight pages of old photographs, which is attached as a PDF.