You are here: Home>Categories>Saxons>Saxon East Meon 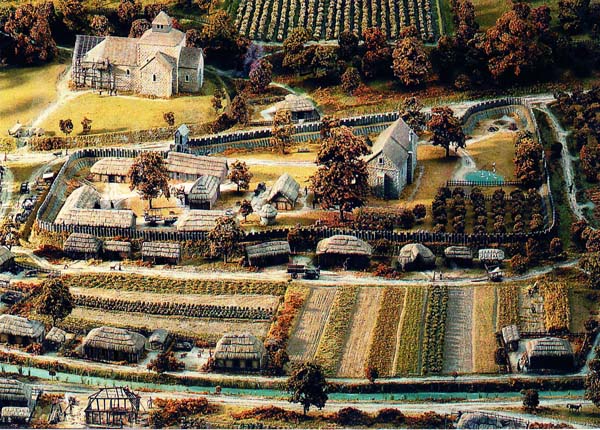 Model of East Meon in 1086 ... showing a village of importance in Saxon times.

Before the ’Saxons in the Meon Valley’ project, East Meon was known to have been a Minster and a large Hundred in the time of Alfred the Great, and subsequently. Click here for one version of the village’s history in Saxon times, on the History Group website.

The first PDF on this page contains a transcript of extracts from F.G.Standfield’s account, in his ’A History of East Meon’. It contains detailed descriptions of the boundaries of ’Aete Meone’ contained in the royal charters of the 9th, 10th and 11th centuries.

The second comprises notes taken from Barbara Yorke’s book Wessex in the Early Middle Ages, summarising the points relevant to the history of Jutes and Saxons in the Meon Valley.

The third PDF is an extract from a talk given by the Reverend Terry Louden on the arrival of Christianity in the Meon Valley.