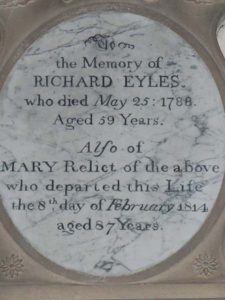 The first Richard Eyles was a church warden; he is commemorated by a plaque in All Saints Lady Chapel, commemorating his death in May 1788, aged 59, and of his wife Anna Maria, who died in 1814. 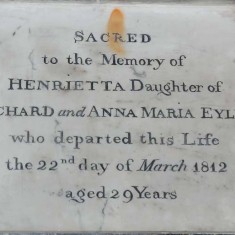 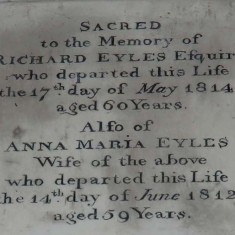 Plaque dedicated to Richard Eyles II, who died in 1814, and his wife Anna Maria. 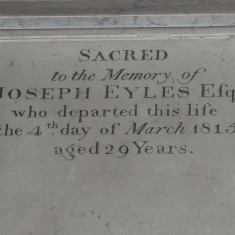 Plaque dedicated to Joseph Eyles II, who died in 1815.

Plaques dedicated to the memory of members of the Eyles Family, in the Lady Chapel of All Saints Church. From 1783 – 1827, Glenthorne House was owned by the Eyleses three Richards and two Josephs, a family which evidently rose to considerable wealth and distinction.

The first Richard Eyles was a church warden. He was the parish’s biggest property owner,’ rated as the occupier of Court Farm’ in the 1750s; he also occupied ’Beerly Farm’ in the 1760s.

Two of his sons were Deputy Lieutenants of Hampshire in 1802. One, Captain Sir Joseph Eyles RN, was described in the citation as ‘of East Meon, with lands in that parish at Ramsdean, Tuggall, Burley’ – in other words, most of the parish to the north of the village. The other son was the second Richard, ‘with lands in that parish within the tythes of  Riplington, Froxfield and also lands called Burley in the Parish of East Meon.’ This Joseph died in 1804, when Richard II inherited Glenthorne. Freddie Standfield reports that this Richard Eyles occupied Bereleigh house and rebuilt it ‘on the grand scale’. He in turned died in 1814, leaving it to the next Joseph, who died in 1815 aged only 29, passing the house on to Richard Eyles junior, who owned it until 1827.